Brief encounters in The Congo 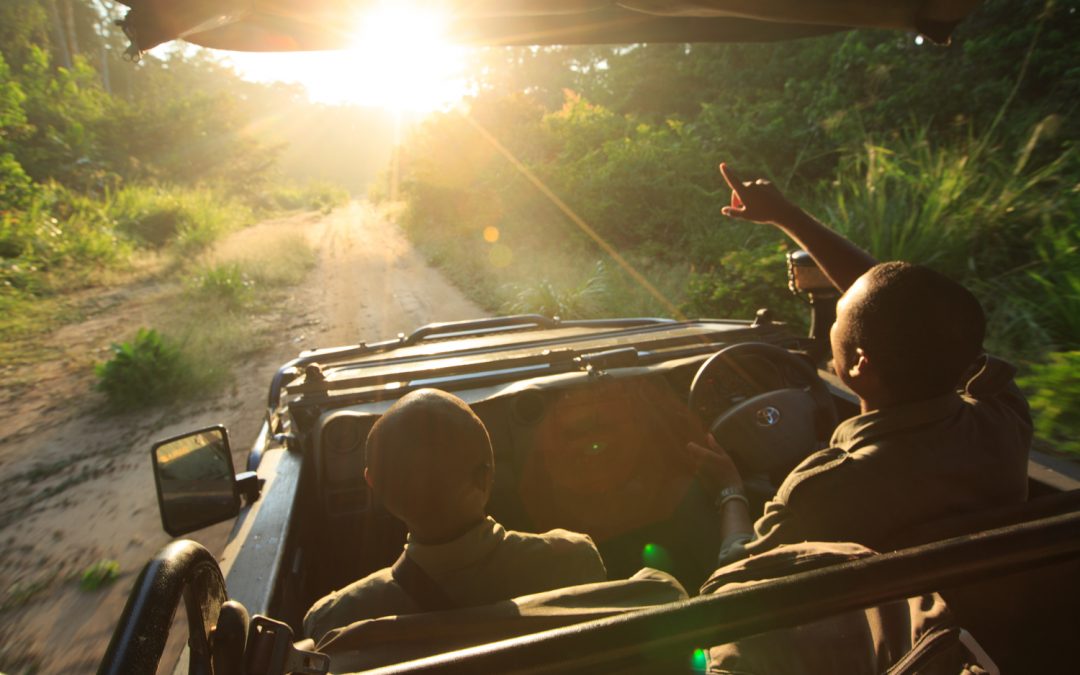 How long does it take to capture a photo? The technically minded among you might suggest that it takes as long as the shutter is open. One click and it’s done. One second, 1/30sec or maybe 1/2000sec? A cheap thrill and it’s all over. In one sense you’d be right, of course, but that brief moment when the shutter is open and the sensor sucks in the light is only part of the story and a very, very small part at that.

When I travelled to the heart of Africa with a mission to photograph Western lowland gorillas, I had a strong sense of how photography is much more than just a brief moment. I’d previously photographed mountain gorillas in Rwanda so had some idea of what to expect but I also knew that lowland would be a tough photographic challenge, partly because of the habitat they are in and partly because of their typical behaviour.

Speaking to a gorilla researcher in Congo-Brazzaville, my ‘challenge’ seemed to grow bigger. The group of habituated western lowland gorilla I was to visit tended to be found in deep, dense vegetation, moving constantly as they browsed the forest larder. Capturing glimpses of them was sometimes hard enough so to get a ‘good’ shot would be down to their mood and a large slice of luck.

A day later I was trekking in the Congo, trying to avoid the ants that wanted to devour my ankles and listening to the sounds of the rainforest. Our tracker led us deeper into the vegetation as he followed a map in his head created by the signs, sounds and smells he encountered. It was fascinating to watch him.

We twisted left, right, and then left again, slowly picking our way through a sea of towering plants. There was no hacking of the undergrowth with a machete; instead he carefully snipped here and there with secateurs and if I looked behind I could barely see a trail in our wake. 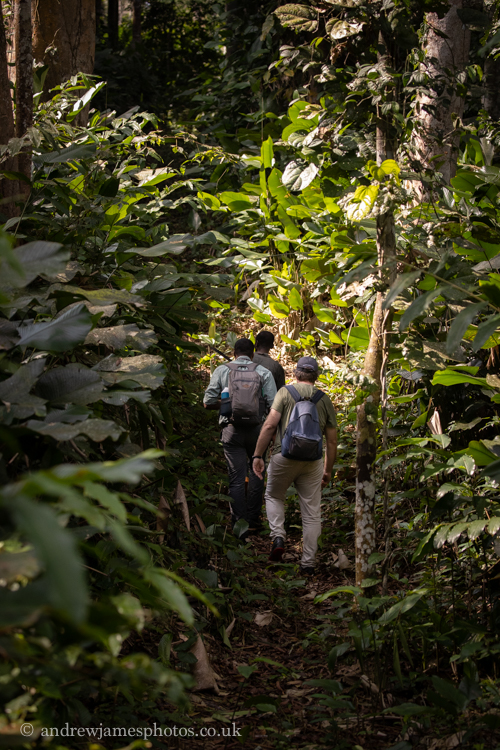 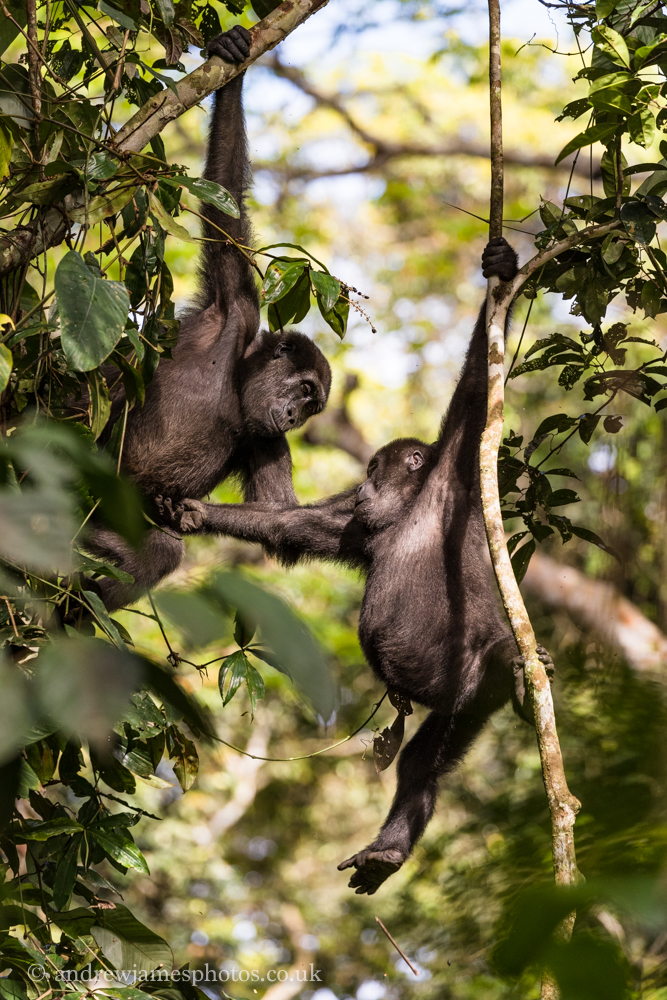 We stopped frequently, waiting silently as he listened. I heard only the buzz of sweat bees flitting around my ears until… yes, a soft, almost muted crash of something large in the forest just ahead of us. We moved again. I prayed for a clearing to open up and a family of chilled lowland gorillas to be playing at the very centre, bathed in a pool of soft light. Sadly, the clearing never materialised.

Instead, there was a gesture from the tracker to look upwards. Peering through the vegetation I could see a tree and on that tree were gorillas, both large and small, backlit, obscured by branches and cautiously observing us. Highest of all was the largest dark shape – the silverback. I didn’t even bother to lift the camera to my eye as his position and the light were conspiring to make it an impossible shot. Instead, I watched and enjoyed the encounter.

When the silverback moved to a spot lower in the tree I finally raised the camera to my eye and fired off a couple of shots at 400mm. Shooting up rarely yields good results and I needed +2 exposure compensation to get the exposure right on him. And as predicted, I didn’t like the shot beyond it being a record of a silverback in a tree.

Seconds later, he shifted position again and then practically slid down a smaller tree like a fireman coming down a pole. He did it so quickly and in a place obscured by more vegetation there was no chance of a meaningful shot. Then he disappeared into the sea of vegetation, quickly followed by the rest of the group.

We also followed, getting occasional glimpses of rustling vegetation before finally stumbling through a particularly thick patch of jungle and getting a view of two youngsters playing in a tree.

Conditions were still tough but the lighting was slightly better, if a bit harsh, and I was able to drop ISO from a heady 3200 to 800 and rejoiced at shutter speeds of nearly 1/1000sec. Several frantic minutes later, as the pair played happily together, swinging to and fro and deliberately winding each other up, I knew I had salvaged something from the day.

The next morning we were back early and it felt the rainforest was still waking up around us. The gorillas had moved slightly and were enjoying an on the ground day. In theory this was good. No pointing up at a bright a sky and maybe an opportunity to photograph them at equal level. To me, this always looks best.

At the start of this journey I’d carried in my head an image of a lowland gorilla staring with intensity into my camera. It was unlikely, given the circumstances, but part of what we do as photographers is hope. When hope fails, we deal with what we get. What I was dealing with was low light under the green canopy. Well this and just occasional, fleeting glimpse of ‘something’ moving in front of me. I felt a bit like a diver trying to chase a seal through kelp!

ISO 3200 and the widest aperture my 100-400mm zoom would give me was still only offering shutter speeds around 1/125sec. Far too slow really but even with the Canon EOS 1DX I don’t like pushing above 3200, if at all possible. Thank goodness for image stabilisation and a steady hand.

Finally, through the frame of leaves I had a view of a face peering at me. Leaves obscured half of the face so I fixed the AF on the one visible eye and fired off two quick shots.

The gorilla moved and so did I. When it stopped briefly I managed another shot. Then it slipped into the sea of leaves and was gone from sight. I reviewed the image quickly and liked its hand over its face, almost as if it was laughing at me. And why not? I must have made a comical figure.

A few minutes more of peering into the undergrowth I spotted a shape in the darkness. It couldn’t have been more than 5 metres away and I dropped to my knees looking for a clearer view through the dense vegetation. There was light dancing off the leaves behind but almost nothing on the gorilla itself. Nevertheless I took one shot with the gorilla looking away from me.

I liked the framing. The dark foreground leaves seemed to wrap around the portrait making it very intimate. There were a few patches of light filtering through the leaves and falling on the head and body, just not where I wanted them and there was no eye contact.

I shifted my position to the left. In doing so my knee crunched on a piece of dry wood and it snapped. The gorilla turned to the sound; a patch of light moving tantalisingly close to its eye but not close enough to light it up. In this moment I genuinely thought about how long it takes to capture a photo. This was almost the photo I had carried in my head from home to this hot, sweaty, claustrophobic encounter deep in the Congo rainforest. The photo I wanted was there in front of me, except the gorilla needed to turn its head another fraction of an inch or it was going to another one of those ‘could have been’ moments. 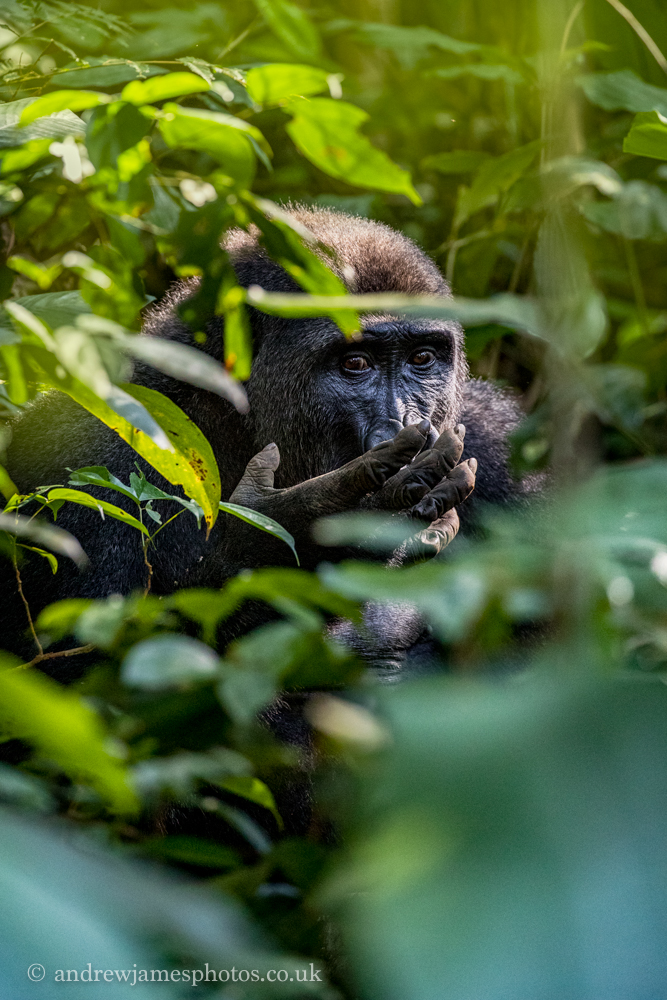 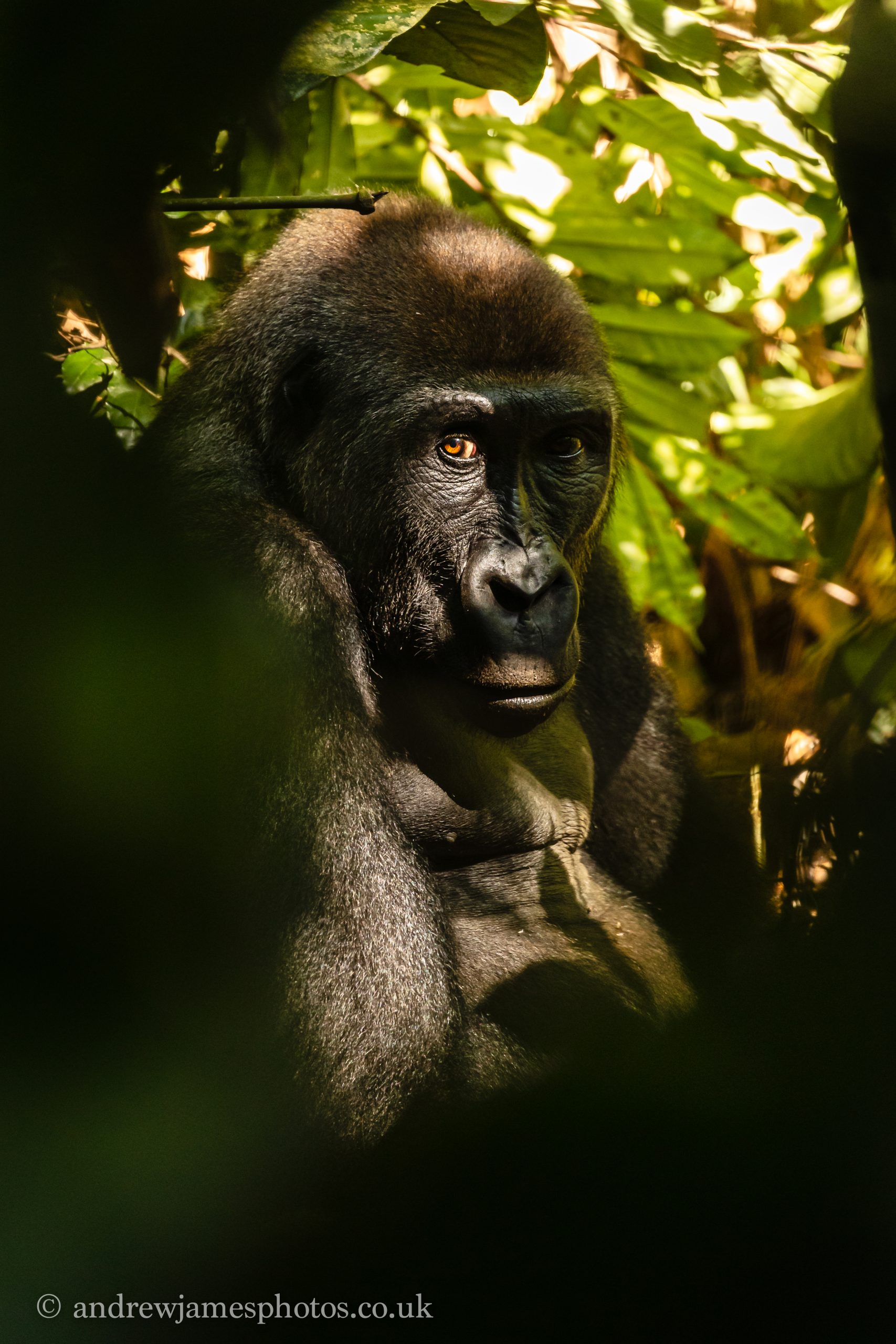 As I waited, barely daring to breathe, I conclude that a photograph isn’t only taken when you press the shutter button. The visualisation of what you want to shoot, the hours on a plane, the endless times you have tried to take a photograph and come home with nothing, the number of ant bites on ankles, the years spent learning and analysing, and the final few seconds spent holding camera and lens to the eye trying not to mist up the viewfinder with your breath are all part the untold story and the time it takes to capture a photo.

I don’t know how the light finally came to fall on its eye. Had it turned more? Had the light somehow moved, projecting through a tiny gap in the surrounding leaves? In the brief moment that its beautiful, innocent, captivating orange eye was illuminated I went back into ‘technical’ mode and the rest of my brain shut down: A single AF point locked onto the eye, f/5.6, 1/200sec (too slow but with a steady hand and a bit of luck), hold breath, squeeze shutter button. I took three shots in quick succession before the gorilla looked away and the encounter was over.

I knew without looking at the LCD screen that I had the shot I had imagined when at home. I’m sure there are many better portraits of lowland gorillas but this was my shot, the one that started in my head at home and came together in the Congo jungle. The light wrapped around the gorilla’s face, the gaze of its eye felt like it was looking right into me and the angle of the head gave me the portrait I wanted.

It was hard won and an image I’ll enjoy for years to come knowing that, although I came away with a smaller number of photos than ideally I’d have liked from that encounter, each successful shot felt like winning the lottery.